A Critique Of The… 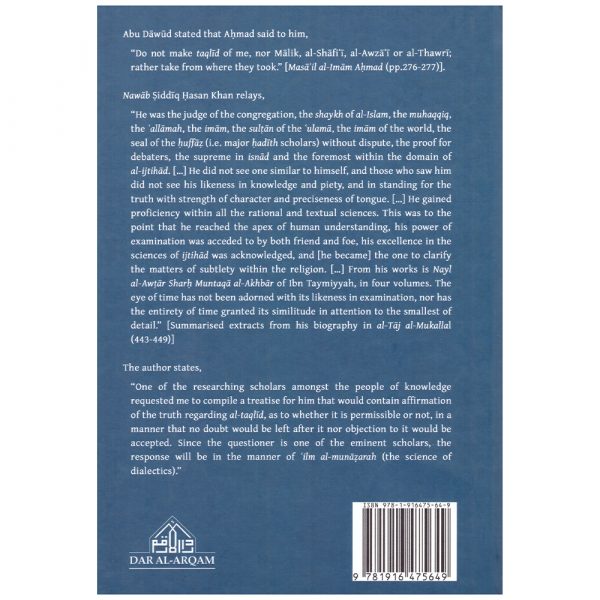 A Critique Of The Ruling Of al-Taqlid – Imam al-Shawkani

Abu Dāwūd stated that Aḥmad said to him, “Do not make taqlīd of me, nor Mālik, al-Shāfiʿī, al-Awzāʿī or al-Thawrī; rather take from where they took.” [Masāʾil al-Imām Aḥmad (pp.276-277).

Nawāb Ṣiddīq Ḥasan Khan relays, “He was the judge of the congregation, the shaykh of al-Islam, the muhaqqiq, the ʿallāmah, the imām, the sulṭān of the ʿulamā, the imām of the world, the seal of the ḥuffāẓ (i.e. major ḥadīth scholars) without dispute, the proof for debaters, the supreme in isnād and the foremost within the domain of al-ijtihād. […] He did not see one similar to himself, and those who saw him did not see his likeness in knowledge and piety, and in standing for the truth with strength of character and preciseness of tongue. […] He gained proficiency within all the rational and textual sciences. This was to the point that he reached the apex of human understanding, his power of examination was acceded to by both friend and foe, his excellence in the sciences of ijtihād was acknowledged, and [he became] the one to clarify the matters of subtlety within the religion. […] From his works is Nayl al-Awṭār Sharḥ Muntaqā al-Akhbār of Ibn Taymiyyah, in four volumes. The eye of time has not been adorned with its likeness in examination, nor has the entirety of time granted its similitude in attention to the smallest of detail.” [Summarised extracts from his biography in al-Tāj al-Mukallal (443-449)]

The author states, “One of the researching scholars amongst the people of knowledge requested me to compile a treatise for him that would contain affirmation of the truth regarding al-taqlīd, as to whether it is permissible or not, in a manner that no doubt would be left after it nor objection to it would be accepted. Since the questioner is one of the eminent scholars, the response will be in the manner of ilm al-munāẓarah (the science of dialectics).”