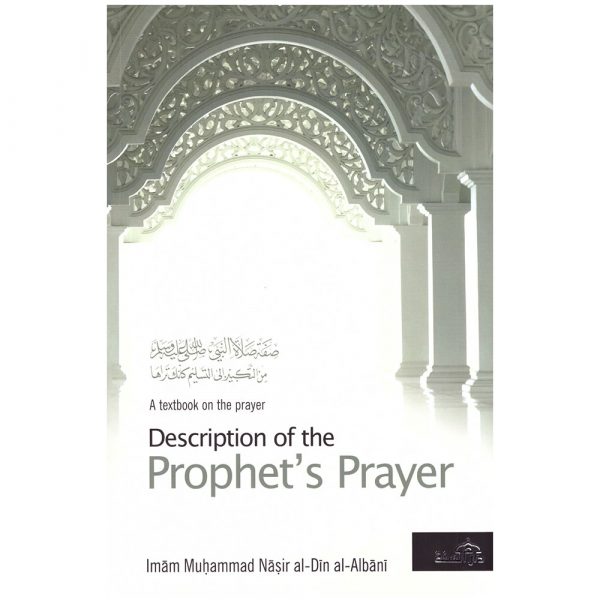 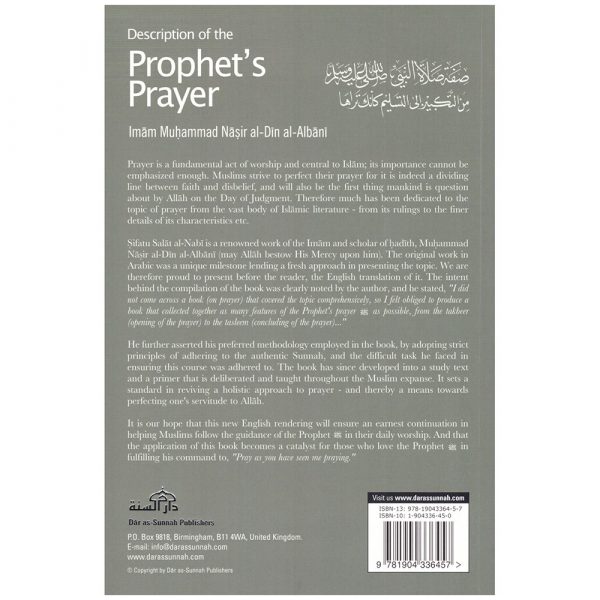 A text book on the prayer: Description of the Prophets Prayer

Translated by Ayman ibn Khalid. This edition also includes transliteration for those who cannot read Arabic.

Salah (prayer) is a fundamental act of worship and focal in Islam, its importance can never be over-emphasised. Muslim strives to perfect their prayer for it is indeed the first thing mankind will be question about by Allah on the Day of Judgment. For this reason, much has been dedicated to the prayer from the vast body of Islamic literature – from its rulings to the finer details about its characteristics etc. and it will continue to be taught and studied throughout the Muslim expanse.

Sifat al-Salatun-Nabi is a renowned work of the late Imam and scholar of hadeeth, Muhammad Nasirudin Al-Albani (may Allah bestow His Mercy upon him). The original work in Arabic was a unique milestone with a fresh approach in presenting the topic – and we are proud to present before the reader, the new abridged English version of it. The intent behind the compilation of the bookwas clearly noted by the author, and he stated, “I did not come across a book (on prayer) that covered the topic comprehensively, so I felt obliged to produce a book that collected together as many features of the Prophet’s prayer (peace and blessings of Allah be upon him) as possible, from the takbeer (opening of the prayer) to the tasleem (concluding of the prayer)…”

He further asserted his preferred methodology employed in the book, by adopting strict principles of adhering to the authentic Sunnah, and the difficult task he was faced in ensuring that. It has thus developed into a study text, and a valuable primer setting a standard in reviving the method of our prayer – and becoming a means in perfecting our servitude towards Allah in the Prophetic manner.

It is our hope that this new English rendering will ensure an earnest continuation in helpingMuslims who wish to follow the guidance of their Prophet (peace and blessing of Allah be upon him) in their daily worship. And that the utilisation of this work becomes a catalyst for those who truly love the Prophet (may Allah bestow His Mercy upon him) in fulfilling his command to, “Pray as you have seen me praying.”