How to Escape Sins… 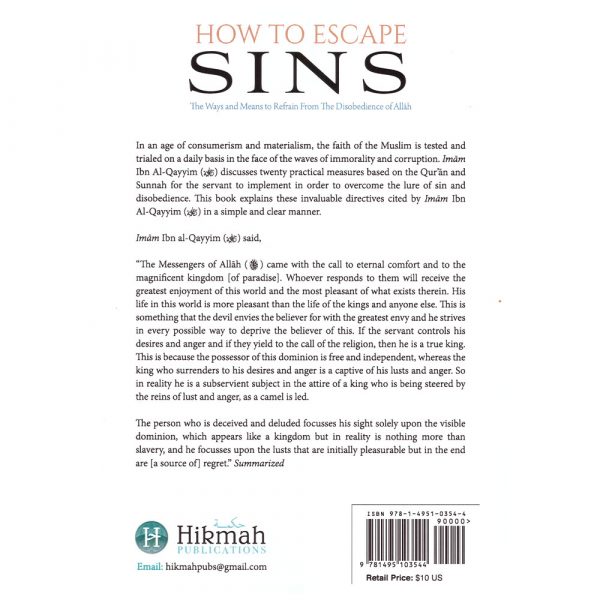 The Ways and Means to Refrain From the Disobedience of Allah

In an age of consumerism and materialism, the faith of the Muslim is tested and trialed on a daily basis in the face of the waves of immorality and corruption. Imam Ibn Al-Qayyim discusses twenty practical measures based on the Qur’an and Sunnah for the servant to implement in order to overcome the lure of sin and disobedience. This book explains these invaluable directives cited by Imam Ibn Al-Qayyim in a simple and clear manner. Imam Ibn Al-Qayyim said: “The Messengers of Allah came with the call to eternal comfort and to the Magnificent [Kingdom of Paradise.] Whoever responds to them will receive the greatest enjoyment of this world and the most pleasant of what exists therein. His life in this world is more pleasant than the life of the kings and anyone else. This is something that the devil envies the believer for, with the greatest envy, and he strives in every possible way to deprive the believer of this. If the servant controls his desires and anger and if they yield to the call of the religion, then he is a true king. This is because the possessor of this dominion is free and independent, whereas the king who surrenders to his desires and anger is a captive of his lusts and anger. So in reality he is a subservient subject in the attire of a king who as being steered by the reins of lust and anger, as a camel is led. The person who is deceived and deluded focuses his sight solely upon the visible dominion, which appears like a kingdom but in reality is nothing more than slavery, and he focusses upon the lusts that are initially pleasurable but in the end are [a source of] regret.”