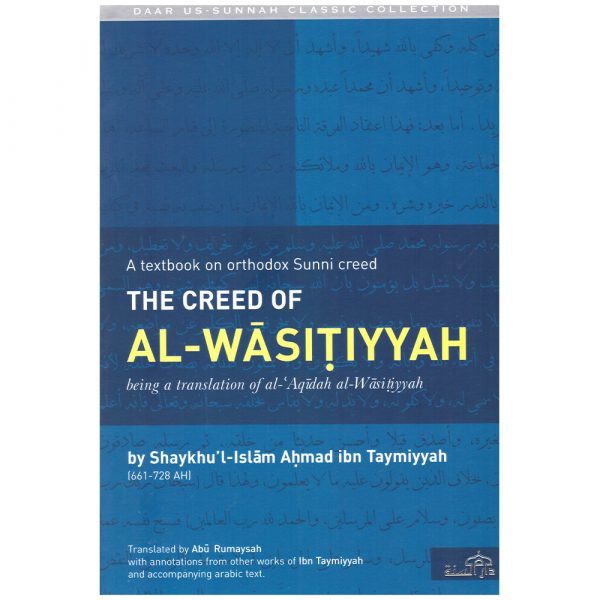 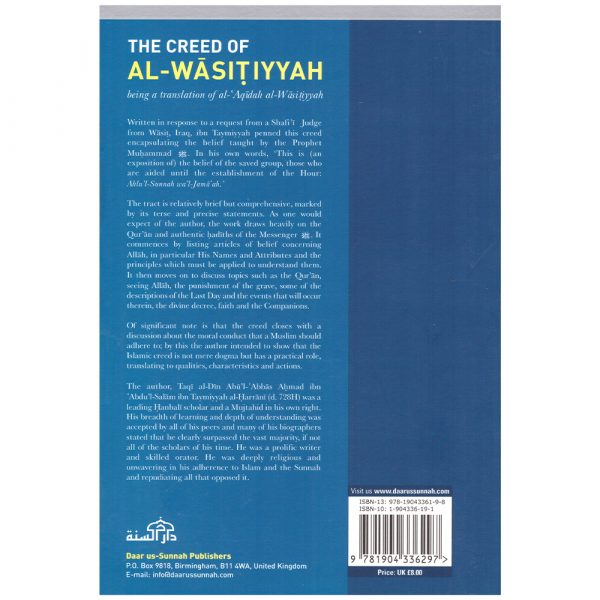 The Creed of Al-Wasitiyyah – Ibn Taymiyyah

A textbook on orthodox Sunni creed The Creed of Al-Wasitiyyah by Shaykuhl- Islam Ibn Taymiyyah (661-728 AH) being a translation of al-Aqidah al-Wasitiyyah Written in response to a request from a Shafi Judge from Wasit, Iraq, Ibn Taymiyyah penned this creed encapsulating the belief taught by the Prophet Muhammad Peace be upon him. In his words, ‘this is (an exposition of) the belief of the saved group, those who are aided until the establishment of the Hour: Ahlul’l-Sunnah wa’l-Jama’ah.’ The tract is relatively brief but comprehensive, marked by its terse and precise statements. As one would expect of the author, the work draws heavily on the Qur’an and authentic hadiths of the Messenger. It commences by listing articles of belief concerning Allah, in particular His Names and Attributes and the principles which must be applied to understand them. It then moves on to discuss topics such as the Qur’an, seeing Allah, the punishment of the grave, some of the descriptions of the Last day and the events that will occur therein, the divine decree, faith, the Companions and the Awliya. The author, Taqi ud-Din Abu’l-Abbas Ahmad Ibn al-Halim ibn Abd al-Salam Ibn Taymiyah al-Hanbali was born in , 661 AH (1263 AC) in Haran, which is now in Eastern Turkey, near the border of northern Iraq.. His family had long been renowned for its learning , among his teachers, was Shams ud-Din Al-Maqdisi, first Hanbali Chief Justice of Syria following the reform of the judiciary by Baibars. The number of Ibn Taimiyah’s teachers exceeds two hundred. Ibn Taimiyah was barely seventeen, when Qadi Al-Maqdisi authorized him to issue Fatwa (legal verdict). Qadi remembered with pride that it was he who had first permitted an intelligent and learned man like Ibn Taimiyah to give Fatwa. At the same age, he started delivering lectures. When he was thirty, he was offered the office of Chief Justice, but refused, as he could not persuade himself to follow the limitations imposed by the authorities.